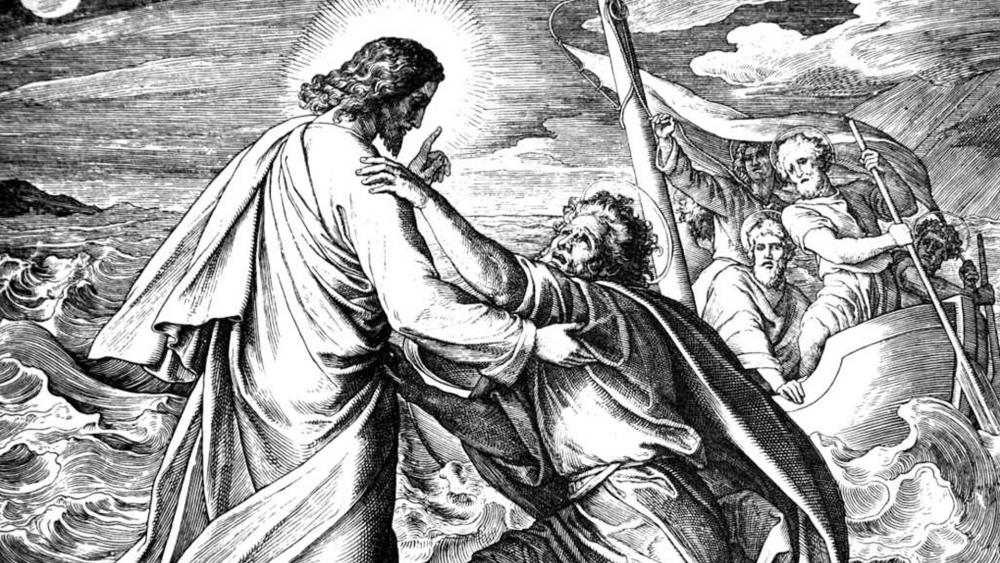 Fisherman to follow Jesus Christ (Yeshua HaMashiach), the Apostle Peter is one of the great stories of a changed life in the Bible. Check out this timeline and biography of the life of Peter.

The Apostle Peter may have been the most outspoken of the twelve apostles in Jesus’ ministry on earth. He certainly became one of the boldest witnesses for the faith. His beginnings were certainly humble in origin. He was born about 1 B.C. and died sometime around A.D. 67.

Peter was originally named Simon. Jesus was the One Who changed Peter’s name. Peter means “rock” or literally Petra. He was a Galilean fisherman and was the brother of Andrew. The brothers came from the village of Bethsaida (John 1:43, 12:21). Peter was married.

He was also a follower of John the Baptist. Peter, like all humans before their calling, was a sinful man. In fact he was ashamed of his sinfulness in the presence of Jesus Christ (Luke 5:6-8). Peter was perhaps the very first disciple that Jesus called along with His brother Andrew.

Peter left his career as a fisherman to follow Jesus.

Fishermen at that time were gruff, unkempt, vile, shabbily dressed, and often used vulgar language. The fishermen of the first century were a man’s man. They were full of vigor and had boisterous tempers. This is perhaps why James and his brother John were called the Sons of Thunder (Mark 3:17).

Their’s was a rough life since fishing was a very physically demanding job. They must have been somewhat fearless too because some of the storms that came quickly upon the Sea of Galilee were fierce and furious. They often caught the fishermen by surprise and could easily capsize the 20 to 30 foot boats they used.

Peter was always putting his foot in his mouth but one thing you could say about Peter was that when Jesus told them (Peter and Andrew) to “follow me” they simply walked away and left everything they had without a second thought (Luke 5:9-1). Consider the fact that this meant that they left everything – all of their fishing boats, their fishing nets, and all the accessories that came with their trade. How many today would be willing to leave their own business to follow Someone that had simply asked them to follow Him?

As mentioned earlier, Peter was among the first disciples called by Jesus and he was frequently their spokesman – for good or bad. One thing that he is credited with is the special insight that he had concerning Jesus’ identity. Peter was the first to call Jesus the Son of the Living God – the Messiah (Mark 8:29, Luke 9:20, Matt. 16:16-17).

When Jesus called him, Peter knew that He was of God and felt unworthy to be in Jesus presence (Luke 5:6-8). Even so, Jesus did not hesitate and told Peter and Andrew that He would make them “fishers of men” (Mark 1:17).

Peter was bold but often times in the wrong. Once he even rebuked the Lord and said that he was willing to die for Jesus even though at the arrest and trial of Jesus he denied Him three times (Matt. 16:21-22). Jesus loved the disciples and knew which of those whom would remain loyal to Him and those who would betray Him (Judas Iscariot).

Peter was an eyewitness to the many miracles that Jesus did and also witnessed the Shekhinah Glory along with John and James in the Transfiguration. This was where Jesus’ humanity was peeled back to reveal the glory of His Divinity (Matt. 17:1-9).

Peter the Disciple to the Apostle Peter

A disciple means a “follower of” and that is what most Christians actually are today. An apostle is “one sent forth” in the sense of sent forth by God to proclaim the gospel of Jesus Christ.

The biblical definition of an apostle and the only one’s that are called apostles in the New Testament had to be either with Jesus during His earthly ministry (like the disciples) or having seen the risen Christ (as did Paul who was taught three years in the desert by Jesus Christ Himself).

After Christ tells the disciples about the end of the age (Matt. 24) He gives them the charge or command of the Great Commission (Matt. 28:18-20). This is the very last thing that Jesus tells them (Acts 1:8) and from that point on the disciples (followers of Christ) become the apostles (those sent forth).

The designation of their being apostles was never used until after the Ascension of Christ (Acts 1) because before then, they were still following Jesus. After Christ had ascended to the right hand of the Father and was seated there (signifying His earthly ministry was done – except through the apostles) He sent them forth to go to all ends of the earth to proclaim the gospel of the Kingdom of God.

Peter was the first one to preach on the day of Pentecost after the coming of the Holy Spirit and he was the first one to proclaim Christ to a Gentile. He was one of the boldest apostles of all. He willingly suffered persecution, imprisonment, beatings, and even rejoiced at the fact that he was worthy to suffer disgrace for the Lord‘s sake (Acts 5:41).

The Gospel of Mark or of Peter?

There is extremely reliable evidence through church tradition and early church historians that the Gospel of Mark is actually the gospel of Peter. Peter is said to have dictated his discipleship with Jesus to John Mark, who was a companion of his for many of the later years of his life.

If you read the Gospel of Mark you can see the extremely fine details of what appears to be an eyewitness from the perspective of Peter. John Mark was not ever a disciple of Jesus and he was not an apostle. There is little doubt that the work of Mark and his gospel is actually the story of Peter who retold the story and then was written down by John Mark.

This is testified by the fact that Mark was not present for Jesus’ ministry and the extremely intimate details that are described in Mark. Some of the events where Peter, John, and James who were often alone with Jesus, like the Transfiguration, are like a first-person retelling of the story.

The next time you read the Gospel of Mark, think about Peter and see if you can not see more clearly the realization that this had to be Peter’s eyewitness account – an account that only Peter could tell.

In the days leading up to Peter’s death, almost all of the apostles had been martyred. Did Jesus actually predict Peter’s death by crucifixion when He said that “when you are old you will stretch out your hands, and another will dress you and take you where you do not want to go” (John 21:18-19)?

The church historian Tertullian, Origen, and Eusebius state that Peter’s was stretched out by his hands, he was dressed in prison garb, he was taken where no one wanted to go (a crucifixion), and was crucified. He was said to be crucified upside down because he felt unworthy to be crucified in the way that the Lord Jesus Christ had been.

From an arrogant, cocky, man of thunder, he became a humble, willing, obedient servant of the Lord even to death. He rejoiced in that day of his death, knowing that he would be reunited with his beloved Savior. This was a lifetime of 65 years – of which his last thirty-three would be devoted to proclaiming the gospel of Jesus Christ. In the Old Testament, no one could even be a priest until they were thirty years of age.

David became king at age thirty and this age is near the peak of mental and physical abilities. Peter will be one of only 12 apostles that will rule with Jesus Christ in the Kingdom of Heaven. The lowly fisherman became a mighty fisher of men – and one that changed and shaped the world forever and is still proclaiming the Gospel of Jesus Christ through his gospel (written by Mark), the book of Acts, and through the epistles of 1 and II Peter.
Who is your favorite Bible character? Let us know in the comments!