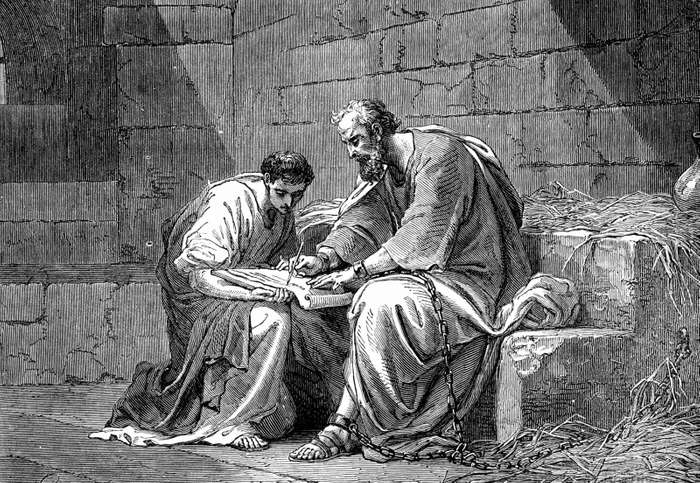 Apostle Paul or Paul the Apostle in prison, writing his epistle to the Ephesians © Jupiterimages

Apostle Paul or Paul the Apostle, original name Saul of Tarsus, (born 4 bce?, Tarsus in Cilicia [now in Turkey] — died c. 62–64 ce, Rome [Italy]), one of the leaders of the first generation of Christians, often considered to be the most important person after Jesus in the history of Christianity.

Although, Apostle Paul was a major figure within the very small Christian movement, he also had many enemies and detractors, and his contemporaries probably did not accord him as much respect as they gave Peter and James. Paul was compelled to struggle, therefore, to establish his own worth and authority. His surviving letters, however, have had enormous influence on subsequent Christianity and secure his place as one of the greatest religious leaders of all time.

Saul of Tarsus – The Persecutor of the Church

Before becoming the great missionary evangelist, Paul was known as Saul the persecutor of the Christian church. As a devout Jew Saul sought to quiet the quickly growing movement of men and women who followed Jesus Christ. He had permission from the High Priest to persecute those found worshiping the Lord (Acts 9:1, 2).

Saul Meets Christ and the Christians

Saul met the Lord on his way to Damascus to persecute the Christians in Acts chapter 9. There was a bright light from heaven that caused Saul to fall to the ground. The voice of the Lord asked Saul why Saul was persecuting Him. Jesus explained to Saul that when he persecuted the church then he was persecuting the recently risen Lord.

Saul’s response was a proper response. He submitted to the Lord and asked what he should do. Salvation does not come from works, but Saul was showing his submission to the Savior through obedience. Jesus told him to get up and go to the city. This is a beautiful picture of obedience to the Lord’s will. Jesus did not tell Saul everything that would happen in his life in the future, only the next step. Saul obeyed.

The experience left him blind but obedient. He was led into the city to meet Ananias. Though Ananias had heard much about Saul and was justifiably scared, he too obeyed the Lord and took Saul in. Ananias laid hands on Saul and healed him of his temporary blindness.

Saul was not a novice to the Scriptures. He was a devout Jew and knew what God’s Word said. Previous to his conversion though, he did not believe that Christ was the anointed Messiah. As soon as he believed he began to preach Christ in the synagogues.

Barnabas and Paul – Paul and Barnabas

By Acts 13 Saul had been on the receiving end of the persecution. Others in the church began to hear about Saul and accept him into their congregations. He also started going by the name Paul more and more.

The church in Antioch wanted to send out missionaries to preach and start new works. The great leader Barnabas and the growing Christian Paul were chosen. They traveled together and were known as Barnabas and Paul. Barnabas being the leader and Paul the disciple. However, by the end of the chapter they were referred to as Paul and Barnabas. Paul began to take a more active role in leadership and direction for their traveling ministry. To Barnabas’ credit he respected the obvious leading of God on Paul’s life. After this, there was only one other time when the team was referred to as Barnabas and Paul. That was when they returned to Antioch and the church which sent them out. Barnabas was more known as the leader in front of the Antioch church. Though a strong leader, Paul too humbled himself when it was appropriate to allow Barnabas the honor and respect he deserved.

They continued to travel together until Acts 15. In this chapter they took opposing views on taking the young John Mark with them on their next journey. John Mark had abandoned them during the first missionary journey and Paul did not want to give him a second chance. Barnabas took the young man and mentored him like he had done for Paul. The result was that two great preaching teams were then starting churches where there previously was only one. Their argument and separation wasn’t pleasant, but it was used by God to accomplish His purposes.

There are three missionary journeys of Paul. The first one was with Barnabas and John Mark. They went to the island of Cyprus before heading to the mainland where Turkey is today. Their initial thrust was to the Jews, but after a time they turned their attention to the Gentiles. It was shortly after they arrived in Turkey that John Mark returned to Jerusalem.

The second journey is when Silas joined Paul. They picked up Timothy and Luke pretty early in this trip. Though the Bible does not expressly say when Luke joined the team, the language in Acts 16 indicates he joined them in Troas (Luke 16:11). Previous to this time the writer of the book of Acts (Luke) talks about “them” and “they.” However, at this point the language changes to “we.” This was when Paul made his first visit to Corinth where he stayed for about a year and a half. It is possible that Silas stayed there since there was no further mention of him traveling with Paul.

The third journey was marked by Paul and his team staying longer at various places. He even stayed at Ephesus for 3 years (Acts 20:31). Paul sent other teams ahead to various places to preach. Timothy was one of the team leaders. This third journey ended when Paul was in Jerusalem. He was arrested there and spent the bulk of his final 10 years in prisons.

We know that Paul wrote many of the books of the New Testament. They were written to churches Paul had a relationship with or people that Paul met along the way. Here is a list of the books in the order they are found in the New Testament.
Romans
1 Corinthians
2 Corinthians
Galatians
Ephesians
Philippians
Colossians
1 Thessalonians
2 Thessalonians
1 Timothy
2 Timothy
Titus
Philemon

Paul probably wrote the book of Hebrews, though the book itself does not claim an author.

Paul was taken to the Governor Felix in Caeserea in 58 AD where he spent 2 years in prison. Paul appealed to Caesar in Rome. Through a process of time he finally arrived in Rome. He was under house arrest for a couple more years in which he wrote many of his books.

Paul was released from prison and traveled for a couple more years in much of the same territory that he traveled before. He probably died in prison as a martyr in 67 AD.