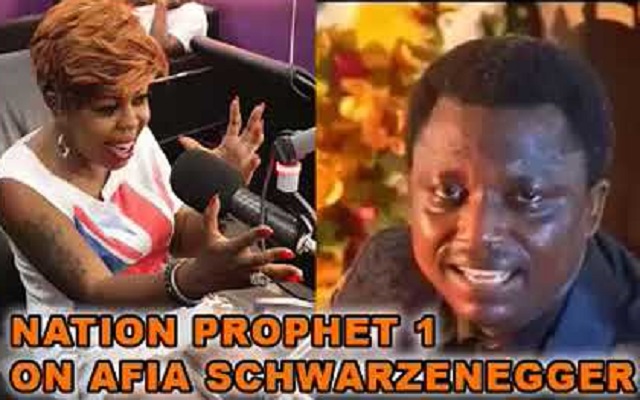 Nation’s prophet, Ebenezer Adarkwa Yiadom has mounted a spirited defense for the embattled actress, Afia Schwarzenegger after she was caught in bed with another man by her husband.

According to him, to err is human thus those who have taken her to the cleaners should think twice.

The Founder and leader of the Ebenezer Miracle Worship Center in Kumasi who has been a victim of the comedian-queen’s vitriolic attacks suspect foul play.

Prophet One is he is popularly called could not fathom why the house help could betray her madam if she had nothing to do with her husband, Lawrence Abrokwa.

He also suspected the incident could be planned since Mr. Abrokwa did not attack the man who caught his wife with.

“I think this thing is planned and the guy who slept with Afia Schwarzenegger knows something about it. Abrokwa did not attack him when he entered the room but rather focused on his wife”.

He cautioned Afia to be careful of the people around her if she wants t o live long on the earth.

“Give thanks to God for your life because the man could have killed her easily. Give your life to Christ and live a righteous life” Prophet One advised.

Listen to audio below: