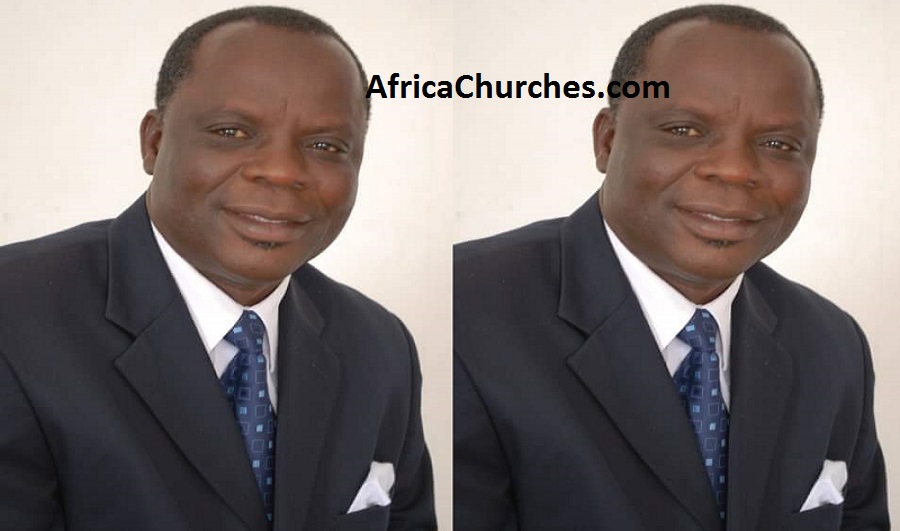 Hence, On December 13, 1948, the Assemblies of God aeroplane, ‘’Ambassador’’ landed in Accra – Ghana, bringing the Wheeler Andersons, Rody Johnson and Ozella Reid to join the missionary family in the Gold Coast.

David Nabegmado joined the Assemblies of God denomination after many years of it’s operation in Greater Accra Region.

But, the Assemblies of God has its roots in the religious revival.

Above all, Reverend David Nabegmado has been stabbed multiple times by a young man said to be his nephew at his office at the church premises.

Even more, Senior Pastor Rev. Dr. David Nabegmado was attacked while preparing to leave his inner office to the main church auditorium to preach as Service was ongoing.

Rev. Dr. Nabegmado, who was allegedly attacked by his nephew in his office.

He was rushed to the Tema General Hospital for treatment but died moments later.

The police have since picked up the suspect, identified as Francis Nabegmado and has also retrieved the weapon – a knife – which was used to stab Rev Nabegmado.

The assailant now in police custody was pursued by the youth in the community when he tried escaping through a commercial taxi which failed to pick him.

It is unclear why the suspect took the Pastor’s life.

Missionaries from Assemblies of God, U.S.A. in the persons of Rev. Lloyd and Margaret Shirer, who were then in Moshiland, Ouagadougou now Burkina Faso crossed over to the Northern Region of the then Gold Coast on horse backs in the early 1931.

With their first recruits, Miss Beulah Buchhwalter and Guy Hickok, they started the first Assemblies of God congregation in Yendi.

Some others who joined later were Florennce Blossom, Henry Garlock, Eric Johnson and Thelma Godwin.

The zeal of these early missionaries was so strong that they consistently worked and witnessed for the Lord under very harsh conditions and in hostile environments.

The likes of Bushwalker and Guy Hickock died in 1942 on the mission field.

Branches of the church were established at Tamale and Walewale in 1935 and Bawku in 1937.

Bro. Mba Mahama was the first Mamprusi Christian to be converted in 1939.

The Assemblies of God denomination has its roots in the religious revival that started during the late 1800’s and continued through the early 1900’s.

The revival was characterized by a widespread experience of spiritual manifestations,

such as speaking in tongues and supernatural healing, giving birth to the Pentecostal movement.

a prominent figure in this history is Charles Parham.

He started a Bible School in Topeka, Kansas, where students came to learn about the Word of God.

There he emphasized the Baptism in the Holy Spirit as a key factor in one’s walk of faith.

During the Christmas holiday of 1900, Parham asked his students to study the Bible to discover the biblical evidence for the Baptism in the Holy Spirit.

From this experience, the Assemblies of God denomination can trace its belief that “Speaking in Tongues” is the biblical evidence for the Baptism in the Holy Spirit.

The revival quickly spread to Missouri and Texas, and eventually to California and beyond.

Pentecostal believers from around the world gathered at the Azusa Street Mission in Los Angeles for a three year (1906–1909) revival meeting.