Two Female Pastors Wed, “I could see myself loving this woman forever” 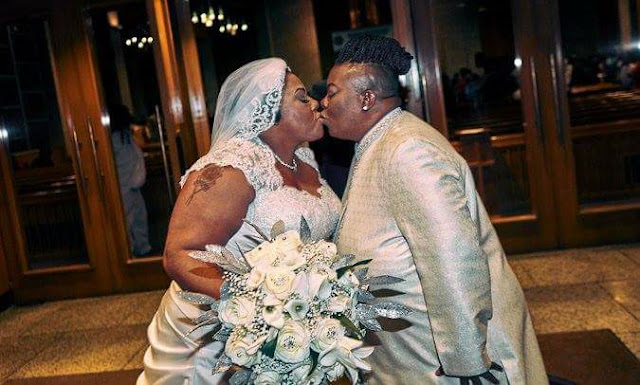 Ms. Brown, 46, and Ms. Gause, 45, both pastors of Rivers of Living Water United Church of Christ, which has locations in Newark and New York, heard much softer words on their wedding day while holding hands before the Rev. Dr. Yvette Flunder, the presiding bishop of the Fellowship of Affirming Ministries, who read from the First Epistle to the Corinthians.

Once upon an Amazing Grace, two choir girls met at a church in Jersey City, and before one of them could clear her throat to sing, she thought she had already caught a glimpse of heaven.

“I was like, ‘Oh wow, what in the world, who’s that, she’s beautiful,’” recalled Ms. Gause, who was then a 16-year-old living in Paterson, N.J. “I immediately felt this kind of strange, warm feeling wash over me, and though I had not yet spoken a word to her, I could see myself loving this woman forever. My head was just spinning.”

Ms. Brown, then 18 and living in New York, was not struck by the same thunderbolt.

Both grew up in religious families. “My father didn’t take it too well,” Ms. Gause said.
Indeed, they were still in Atlanta two days later, when Mr. Gause, carrying a large King James Version of the Bible, confronted them in the lobby of the hotel where the conference was being held.
“He slammed the Bible down on a table and said to us, ‘Did you all read this book?’” Ms. Gause said. “He was furious.”

“Don’t get me wrong, I still love him,” she said. “I still call him on birthdays and holidays and special occasions, though he never picks up the phone.”

“Maybe one day he will realize that nothing has really changed with me except for the fact that I’ve found my perfect soul mate, and he’ll feel like talking to me again,” she said. “But no matter what my daddy says about me or what he thinks of me, he knows down deep, deep inside that I’ll always be his little girl.”