According to GhanaChurch.com analyst, Opambour is on record to have the largest church building and largest congregation at Ahenema Kokoben of Atwima-Kwawomang District in the Ashanti Region, Ghana.

Opambour is the owner of Radio Mercury, a Kumasi-based private radio station and Prophet One Television.
He has also built a hundred-building estate which he has christened Island City at Opambourkrom. 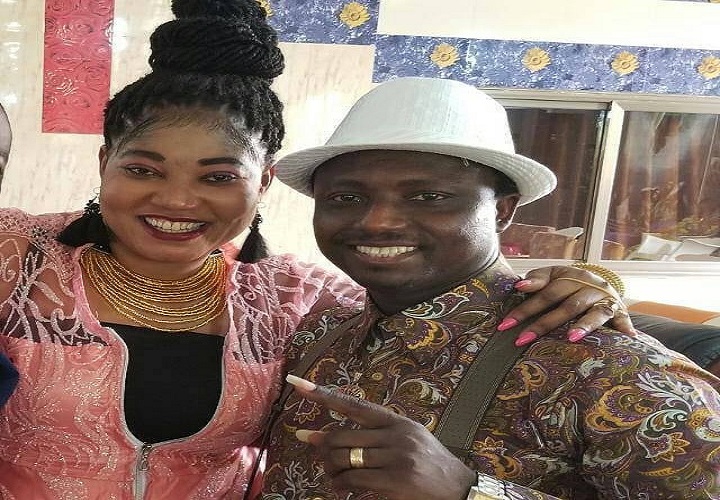 He had his basic education at St. Peters Educational Centre at Kwadaso and later continued at the Kumasi Technical Institute (KTI), where he pursued a course in plumbing. In his early days at school, Kwame was admired by most of his friends because of his melodious voice, even though he was always in tattered school uniform. His melodious voice eventually made him a composer and singer. He is currently married to Mame Mavis and they have five children.

2. How Ebenezer Opambour Adarkwa Yiadom was call into Ministry
Kwame was born into the Methodist Church. He was very active in church activities even though
he was surrounded by Muslims at Alabla, Zongo. At the age of 13 he had a dream in which he
was instructed by somebody to pray over oil and use. He was told to point the oil to the sky or
heaven before praying over it.

He was told that anything he raises up and prays over would be sanctified, and anything he touches with his hands would be blessed by God. Thus, anything blessed by him shall be a blessing to the user. He has the gift of prophecy. He remained in the Methodist Church and drew closer to some of the leaders and ministers. GhanaChurch.com

He prophesied and received revelations about some church members, and counseled them on what to do. He was fond of joining the church leaders and pastors to visit the homes of sick members and whenever he was allowed to pray for the sick, there was manifestation of healing. Opambour had some slight misunderstanding with the elders of the Methodist Church. Some of his views on issues 9.

Conflicted with that of Methodist doctrine. So the leaders did not take them, and that made
Opambuor to leave the Methodist Church, to establish his own church.

3. The beginning of the church
The church started as a prayer fellowship with Opambuor’s peers in the early 1990s at Osei
Kyeretwie Secondary School (OKESS) at Tafo, a suburb of Kumasi. The group flourished and
attracted many people.

This was because those who attended the prayer fellowship felt spiritually fulfilled and so invited others to the meetings. Thus, men, women, young and old started attending the prayer meetings. As membership grew, there was the need to change the venue to a bigger place. Opambour moved the meeting place to Kofrom, a suburb of Kumasi. GhanaChurch.com

It was at this point that he added Ebenezer to his name and became Ebenezer Kwame Adarkwa Yiadom. He also gained the name “electric” from members and people around that area because anytime he touched somebody the person experienced a kind of shock that made him or her fall. His spiritual gifts drew crowds to the church. At Kofrom membership grew so much that he converted the prayer fellowship to a church and named it “Ebenezer Miracle Centre.”

From Kofrom he moved the church to Patasi Estate – Patasi is a suburb of Kumasi. It is a residential area in the Kumasi Metropolitan Assembly. It is about 7 kilometres eastwards from centre of the regional capital, near Rev. Dr. Ebenezer Adarkwa-Yiadom’s rented house at Abrepo Junction, where the church was hosted for sometime, then to a place called “Friends Garden” in Patasi Estate.

He was compelled to buy a land at Ahenema Kokoben to build a church auditorium because of increase membership and also complaints from his neighbours as the activities of the church disturbed their peace in the residential area. GhanaChurch.com

He was the first to settle at Ohenema Kokobem where he put up the church auditorium, his residence and residence for people who participate in his programmes but come from far places. He named the place “Island City.” The church which currently has over twenty thousand members has branches in Accra, Cape-Coast, and Sunyani. According to one of the pastors, one will soon be started in Canada.

4. Vision and Mission
The church exists to preach the gospel to the perishing and win them for God; and also to set the
captives (people who have problems) free from generational or ancestral curses, to liberate
demon-possessed people from the hands of the devil through healing and deliverance
(exorcism). The assumption is that no one is in charge of his or her own life. There are spirits
that either make or mar one’s life, hence the need for a supernatural power to overcome such evil
spirits.

5. Leadership structure of the church
Prophet Ebenezer Opambour Adarkwa Yiadom is the overall head of the church. He has
associate pastors he works with. The next in command is Rev. E. Y. Ankuma. The hierarchy of
the associate pastors is determined by the number of years one has been with the prophet.
Opambuor trains the pastors himself. The training comprises watching him preach, giving them
chance to preach and exercising their spiritual gifts in healing and deliverance. He also allows
the pastors to attend any Bible School they wish. GhanaChurch.com

6. Tenets of the church
Ebenezer Miracle Worship Centre does not have any laid down belief system. The church
believes in everything the Bible teaches. It believes in:
(a) God as the Creator of the universe.
(b) The death, resurrection and ascension and the second coming of Jesus Christ.
(c) The use of the anointing oil.
(d) The sacredness of buramu nsuo – the well water – and anything blessed by Prophet
Ebenezer Opambuor Adarkwa.
(e) Baptism by immersion as a sign of repentance. But emphasis is not so much placed on
baptism since most of the people who go to the centre are not actually interested in
membership of the church but to find solutions to their problems.
(f) Baptism by the Holy Spirit.
(g) It accepts the belief systems of other denominations. Thus, pictures of Mary, the mother
of Jesus, and Jesus himself can be found in the church auditorium.

Ebenezer Miracle Worship Centre starts with a Divine Service on Sunday from 10a.m. to 2.00 p.m.

On Thursdays, there are no activities at the main branch in Kumasi; however, Prophet Opambour visits the other branches in the country. Friday 6.00 a.m. to 2.00 p.m. is used for deliverance (exorcism), what Prophet Opambour calls abayisem. GhanaChurch.com

There are no church activities on Saturdays.

8. A typical Sunday service
On a typical Sunday Service the choir leads Prophet Opambuor Adarkwa, the Associate Pastors
and their wives with songs into the chapel as done in the Mainline churches. This is followed by
opening prayer, praises and worship for about 45 minutes. Then there is songs ministration by
the various singing groups in the church, led mostly by the wives of the pastors, for about 30
minutes. Offertory follows. Members are encouraged to give to God. Boxes are placed at vantage points in front and members are asked to move from their seats and put their offerings into the
boxes.

The congregation prays over the offertory. This takes about 15 minutes. Then, comes a
time of singing and dancing, in preparation for the sermon. This is normally delivered by any of
the Associate Pastors assigned by Prophet Opambuor to do so. The preaching which is normally
based on a short scripture lasts for about 20 minutes.

An important aspect of the Sunday service is healing and deliverance. This follows the sermon
and is done by the Prophet himself. He mounts the pulpit amidst rigorous shouts, claps and
cheers from the congregation with a standing ovation; he is introduced with titles such as “Dr.
Opambuor,” “the history maker,” “the legend,” “Asante Moses,” “prophet one.”

During this time, a kind of ineffable ecstasy fills the church auditorium. He starts the ministration session with songs, most of which are his own compositions. He moves through and fro the
congregation, followed by two or three of the Associate Pastors. He calls people at random and
begins to “prophesy” into their lives as and when supposedly moved by the Holy Spirit. As part
of the prophecy, he reveals the past, tells the present and the future of people present. He reveals
the plans of the devil on people. He attributes the forces hindering the progress of people as
witchcraft, water spirits, demonic forces and ancestral spirits. He reveals the causes of sicknesses
and prays for people. He delegates some of the prayer to his Associate Pastors. He claims to hear the voice of God telling him of the sins people commit secretly that lead to their sufferings. Why ministering, some members of the congregation shout, Odifuo nono meaning “that is the
prophet,” Onyame wo tumi oo with the response being Ena wo ka nu seii literally meaning,
“God has power” and the response is “And what do you say about that?” The service continues
with special offertory in exchange of anointing oil, ranging from Fifty Ghana Cedis to One Ghana Cedis (GHC 50.00 to GHC 1.00).

At this juncture, Prophet Opambour himself receives the moneys from the people and put into the box and the other pastors distribute the anointing oil. An offertory of Fifty Ghana Cedis attracts a personal meeting with the prophet in his house in addition to two small bottles full of oil blessed by him. He gives instruction regarding its usage. A Thirty and Twenty Ghana Cedis offertory also attract two bottles of blessed oil by the prophet but without any special meeting with him; but he gives guidelines on how to use it in order to receive solutions to one’s problems. An amount less than Ten Ghana Cedis attracts oil tied in a polythene bag that is to be used according to one’s own desire. The service ends with a prayer and benediction by the prophet. The choir does not recess.