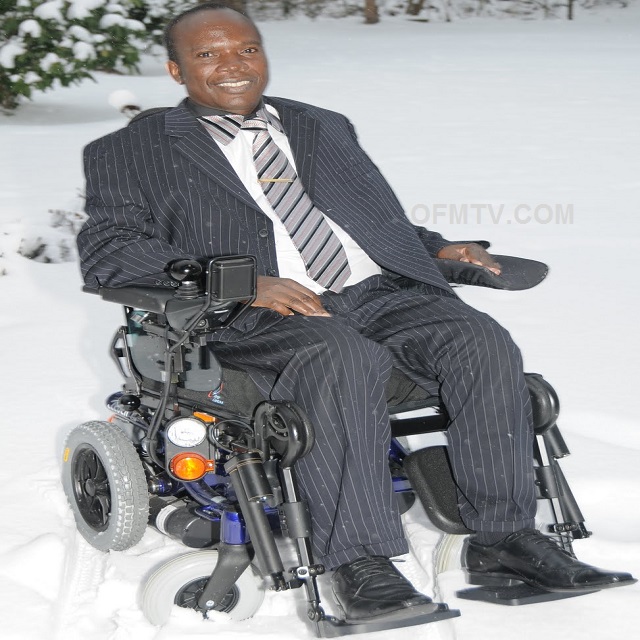 Between 1st February and 31st August 2009, Apostle Dr Michael Ntumy was hospitalized in Paris – France and Hamburg – Germany, following a delicate surgery on his cervical spine. This has resulted in the paralysis on his current situation.

Apostle Dr Michael Ntumy hands and feet became paralysed, which has forced him to use an electronic wheelchair. 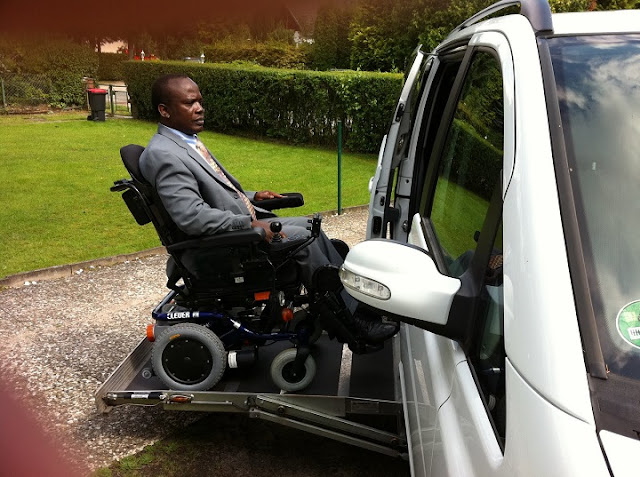 Apostle Dr. Opoku Onyinah and the International Missions Board of the Church of Pentecost , bought a car for Apostle Dr. Michael Ntumy. The ramp is lifting him into the car.

For 27 days he was glued to his bed in an intensive ward and according to him, his life seemed to hang in balance especially when people lost hope for his life and recovery.

Recounting his ordeal in a blog post, Apostle Dr. Ntumy said he spent a total of 209 days in hospital in 2009, and then further spent 123 days the following year in the hospital for various therapies.

Before he became paralysed, the Apostle underwent a surgical operation on his cervical spine. The doctor told him he would lose the use of his hands and feet for between three to six days after the surgery but things did not turn out well as predicted and has now resulted in the use of an electric wheelchair.

Although it’s been years since he got paralysed, Apostle Dr. Ntumy is not discouraged and hopes to recover soon. His therapies are going on well as he has recovered the use of his right hand as well as the partial mobility and sensitivity of both legs and his left hand.

According to him, the expected walking is still being awaited as he continues to use the electric wheelchair and wishes the process of recovery was faster but he’s immediately being reminded by a “still, small voice” that tells him to leave the timing of his recovery to God and allow Him (God) work according to the times and seasons He has set in accordance with His sovereign will and purpose.

His strong faith in the Lord is what keeps him moving and on his 54th birthday he wrote an article which talked about all the trials his being through and how he’s been saved by the Lord, so believes this is just one of the obstacles he needs to conquer in his life.

Read the article he wrote on his 54th birthday.

As I ponder and reflect over the course of my life so far, I realize the exceptional grace God has bestowed on me. I am not going to talk about promotion, position, power, achievements and accomplishments. I am going to share with you about troubles, trials and tears, interlaced with amazing triumphs and testimonies resulting in thanksgiving to God. The enemy of our souls forgets that his orchestrations against us rather result to the praise of God in the long run.

In fact, Apostle Paul said that if he had to boast, he would rather boast about his sufferings for the sake of Christ. My catalogue, however, does not come anywhere near that of Apostles.

1. Been through four wars (Two in Northern Ghana, one each in Liberia and Ivory Coast) Charles Gangay Taylor, Leader of Liberia’s NPFL

2. Taken hostage for 163 days in the heart of the Nimba Forest in Liberia by Charles Taylor’s NPFL rebels while serving as missionary in that country

3. Survived three accidents— two on the road, one on the Volta Lake in Ghana. A Vessel On The Volta Lake
Surely if my life were in my own hands, I would have lost it long ago.

4. Survived an assassination attempt on my life while serving as the youngest-ever Chairman of The Church of Pentecost.

7. Tasting the pains and agonies of paralysis for 1,211 days (to date), moving about in an electric wheelchair.

However, there is an INVISIBLE HAND THAT HOLDS, SUSTAINS and NOURISHES US. THROUGH IT ALL, being kept by THE POWER OF GOD.

Come, beloved, praise the LORD with me.

THANK GOD FOR THE GIFT OF MY LIFE. He has upheld me very tenaciously through it all.Crushed, but not destroyed.

Stand with me in prayer as I go through this phase of my life, doing business for the Kingdom of God even through this “out of season” period.

Believe with me that the expected miracle shall take place soon for His glory.

All these could not have happened for nought. God is definitely up to something.