Missiology, practical theology that investigates the mandate, message, and mission of the church

Missiology is the area of practical theology that investigates the mandate, message, and mission of the Christian church, especially the nature of missionary work. Missiology is a multi-disciplinary and cross-cultural field of study incorporating theology, anthropology, history, geography, theories and methods of communication, comparative religion, Christian apologetics, education methodology, and interdenominational relations.

Christian theology developed over the centuries, starting in early 2nd century and continuing its development up to now. Missiology as a theological discipline appeared quite late in the Christian era, only in 19th century. It was the Scottish missionary Alexander Duff who first developed a systematic theory of mission and was appointed in 1867 to a new chair of Evangelistic Theology in Edinburgh. This first chair of missiology was closed after Duff’s departure but the path was laid. Some years later another theologian, Gustav Warneck, was recognized as the founder of missiology as a discipline in its own right.

Warneck founded the Allgemeine Missions Zeitschrift, the first scientific missionary periodical, in 1874. In 1897, he was appointed to the chair of missionary science at the University of Halle, Germany. His three-volume work on Protestant mission theory and his survey of the history of Protestant missionary work were extremely important for the young discipline. Influenced by Warneck’s work, Catholic Church historian Joseph Schmidlin began lecturing in missiology in 1910 at the University of Munster and was appointed to the first chair of Catholic missiology at the same university in 1914. 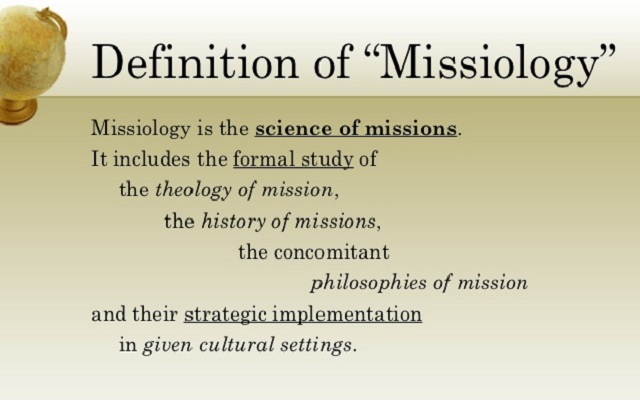 Missiology is the area of practical theology that investigates the mandate, message, and mission of the Christian church, especially the nature of missionary work.

Scope of study
Missiology became recognizable first of all within the study of Christian theology. On the other hand, over the centuries of missions the missionaries encountered various cultures and attitudes to accepting the Gospel by the different peoples. This caused theologians to reflect on issues of society and Christianity, and anthropology and Christianity. Communicating the Gospel and comparing the Christian teaching with other religious or secular teachings made the task of the missionaries even more difficult. They needed a solid theoretical framework within which they could more efficiently found their mission and succeed in spreading the Good News.

In this way missiology became the Christian theological discipline which interacted with many other sciences, such as anthropology, history, geography, communication theory, comparative religious studies, social studies, education, psychology, inter-religious relations, etc. The core of the new discipline remains the teaching of the Church: “Inherent in the discipline is the study of the nature of God, the created world, and the Church, as well as the interaction among these three.”

And at the same time the Christian teaching needs to draw evidences from various other sciences so that through the discipline of missiology the missionaries obtain better understanding on the many different ways of preaching and receiving the Gospel by the peoples of the world.

Definition
The wide scope of study of the discipline of missiology makes it difficult for missiologist to agree upon a unified definition on what missiology is. One approach is to reflect on what mission is and then define the ways in which mission is explained theologically: “Mission is the participation of the people of God in God’s action in the world. The theological and critical reflection about mission is called missiology”

Johannes Verkuyl states, “Missiology’s task in every age is to investigate scientifically and critically the presuppositions, motives, structures, methods, patterns of cooperation and leadership which the churches bring to their mandate” Every mission needs a strategy which can be employed in specific environment, among specific cultural context. This adds to the definition of missiology a three-dimensional area of study: “Missiology is made up of three interdependent areas of study: theology, the social sciences, and strategy. Theology explains the foundations of mission, culture (the social sciences) elaborates on the arena of mission, and strategy explicitly points to the ways in which missions is implemented.[8] Defining what is missiology continues even today and it will continue in the near future until a definition acceptable to all missiologists is coined.

The close interaction between missiology, social sciences and culture made scholars to shape the discipline within the framework of history and sociology and remind about the “colonial past of missions” when Christians often attempted to use their political and economic power in evangelism. Many missiologists are now disavowing these methods and attempt to construct a new paradigm that does not employ such imperialistic approaches which lead to language and cultural imposition.

The issues of syncretism and context in mission have been well explained and missiology obtained the features of intercultural theology.