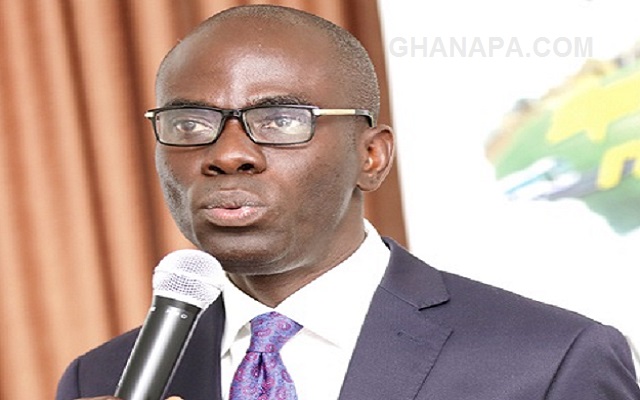 Executive Pastor of Christ Temple of the International Central Gospel
Church (ICGC), Albert Ocran has waded into the controversy about the
special offering embarked on by the church during its Greater Works
conference last week.

He has disclosed that the banner making the rounds on social media was
not put out to solicit for funds from the public as was originally being
speculated.

According to him, the amounts listed on the graphic circulating are
various categories of pledges made by members in a conference
fundraising by one of our guest ministers. I presume that people
pledging different amounts at fundraisers is standard practice.

Read full text of his response below;

Some clarity from CEO of ICGC, Pastor Albert Ocran

Blessings my friends. What a week this has been. An absolutely
phenomenal Greater Works conference and a very thorny side issue.

Let me clarify that this is a personal perspective and not a statement
by ICGC. As you know, the church does not respond to these matters.

The banner making the rounds on social media was not put out to solicit
for funds from the public as was originally being speculated.

As you probably might know, in its 33 years of existence, ICGC has
refused to solicit for or accept funds from outside the church.

By God’s grace, the church supports 15 charities (educational, health
and Christian missions) on a *monthly* basis. This includes the
children’s cancer unit of Korle Bu which has publicly indicated that our
monthly donations for the past 5 years, which are the largest they
receive, have allowed children from poor families all over the country
and West Africa to receive life-saving treatment for free. This is
verifiable.

The amounts listed on the graphic circulating are various categories of
pledges made by members in a conference fundraising by one of our guest
ministers. I presume that people pledging different amounts at
fundraisers is standard practice.

I attended a book launch last year by one of our nation’s sporting
legends at Alisa Hotel. The chief fundraiser started the pledges from
GHc100,000 and came all the way down till everyone could contribute
their widow’s mite. Those who gave the top amounts were even given
special privileges and photo sessions with the author. No one was
offended because each one gave as they could afford. 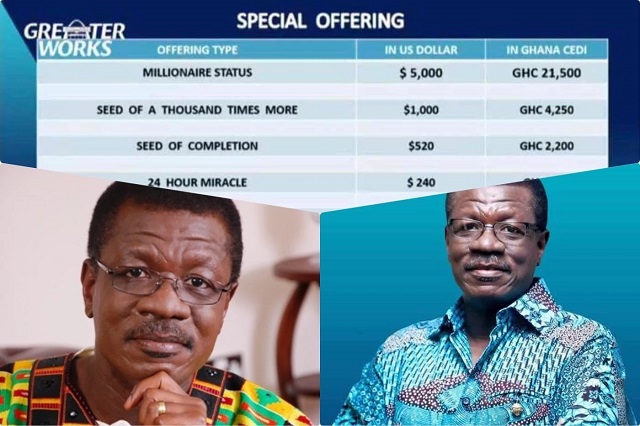 I have also attended church harvests where Chairmen, Vice chairmen and
Supporters were required to contribute role-specific amounts some in
excess of the highest amount on the list currently circulating. Would
that qualify as exploitation? I don’t think so.

I believe that if we want to hold large christian events and
conferences that seat over 50,000 attendees and where the number of new
converts alone is over 7,000, we mustn’t shy away from big
contributions. In other jurisdictions, individuals are known to sign $5
million cheques to underwrite the entire cost of a single crusade.

The preacher who raised the funds is based outside Ghana so he
mentioned the amounts in dollars. It was naturally deemed helpful to
convert them to enable donors pay in local currency.

The issue most people seemed to have was with the categories the
amounts were tagged with. These were simply prayer points he provided
for each giver to base their faith and prayer on. Once we put it into
context, you will agree that the more you commit to something the
greater your expectation is likely to be. Everyone in the conference had
the chance to give according to their strength.

I have personally experienced a 24-hour miracle more than once. I
believe in giving and in financial miracles but it doesn’t make me a
lazy person. I work extremely hard but I am also a firm believer in the
grace of God. *In my humble opinion, a balanced combination of God’s
grace plus hard work is the key to success.

WATCH VIDEO BELOW FROM DR. OTABIL

SO WHERE DID THIS GO WRONG?

The preacher finished preaching the next morning and asked people who
were ready with the various categories of donations to come forward with
their pledges. Thankfully, many responded positively and willingly.

However, as you can imagine, some people had made more than one pledge
and kept asking ushers for the various amounts in cedis as well as
banking details.

Our hardworking projection team therefore took the initiative,
summarized the various categories and projected them for the benefit of
contributors as they came forward.

At that point, the screen snapshots were taken by viewers of the live
streaming service on the internet. The rest, as they say, is history.

We can continue having an informed discussion about the scriptural or
moral dimensions of this issue based on the actual facts that I have
provided as accurately as I can. Informed debate is healthy and no one
must insult a person who genuinely inquires about the scriptural basis
or appropriateness of our actions.

The church as a practice does not issue statements on issues in the
media. The video circulating about Pastor Otabil purportedly responding
was definitely not a response to this issue.

The snapshot was not an advert for funds. The gospel is definitely not
for sale and will never be. Many have visited ICGC Christ Temple, where
Pastor Otabil pastors, and been surprised or even objected to how little
fuss is made about giving and fundraising. It’s just not our focus or
style.*

We are grateful to the well meaning Christians from all over the world
who have reached out in love in a genuine quest to confirm that the
highest standards of excellence and integrity of ministry ICGC is known
for remain intact.

Be assured that ICGC remains resolute and unreservedly committed to
raising leaders, shaping vision and influencing society through Christ.

I hope that this information helps throw a bit of light on the issue. (Sorry it ended up being much longer than I intended).

Thanks once again for asking and God bless.