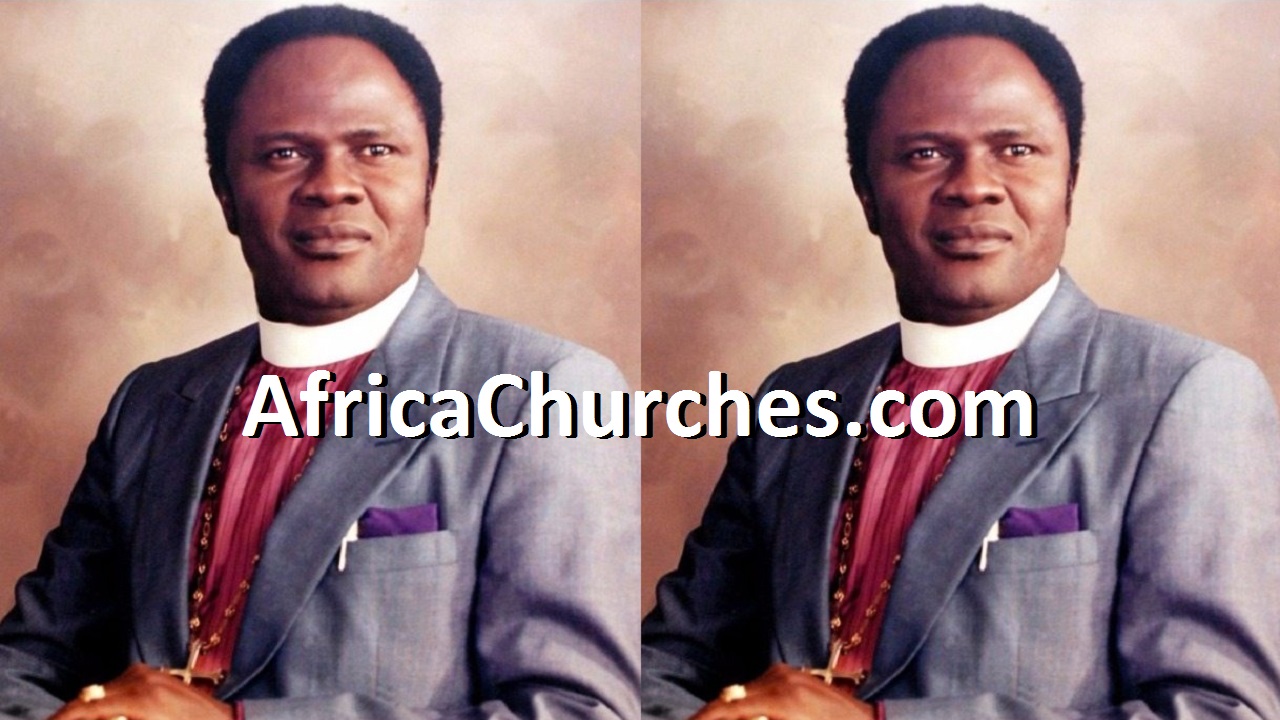 Archbishop Benson Andrew Idahosa – Father of Pentecostalism in Nigeria And Other Countries.

Archbishop Benson Andrew Idahosa born on 11th September 1938, began his ministry at age 24, having given his life to Christ as a football playing prankster in Benin City, in Edo State, south-western Nigeria.

Archbishop Benson Idahosa was popularly referred to as the father of Pentecostalism in Nigeria.

Archbishop Idahosa as a young man, went out to play football at a pitch near a Salvation Army church on a Sunday afternoon when he succumbed to the temptation to aim his shot at the head of the pastor through one of the open windows.

Five attempts to hit his target had failed, then he made what proved to be his sixth and last effort. It wasn’t clear what the ball hit, but it came ricocheting back to hit him on the chest and knock him flat on his back.

He was in such pain that a crowd soon gathered round him.

This drew the pastor’s attention; he came out, prayed for him and his chest that was rapidly swelling returned to normal.

It was the hand of God and young Benson realized it. He followed Pastor Okpo back to church and later answered the altar call. He thus became the very first Bini, as Benin sons and daughters are called, to join that largely Igbo congregation.

Idahosa hit the ground running, as it were. Listen to him as he testified to one of his earliest exploits for God as recorded by a chronicler, Elijah Akinwunmi:

“As a young Christian, I once heard my pastor say during a morning service that Christians could raise the dead in the name of the Lord Jesus Christ.

I believed it with all my heart.

And flying around on my bicycle in those days, I went through the city of Benin in search of a dead person to raise to life. After about five hours of hard searching I found a compound where a little girl had died a few hours before. The corpse had been cleaned and prepared for burial. I walked boldly up to the father of the dead child. “The God whom I serve can bring your baby back to life,” I told him. “Will you permit me to pray for the child and bring her back to life?”

The man was startled, but he agreed. With great enthusiasm, I walked into.

Church of God Mission International Incorporated was divinely born by the urge of the Holy Spirit with specific instructions of the Lord to Archbishop B.A. Idahosa as stated:

“Raise up an army for me, to go with the gospel to all Nations. Gather together those whom I have called and I will send them with the fire of my spirit. Give my word and your example to many who will go to teach, preach and heal”

Church of God Mission International, as it known today, grew from a very humble beginning in 1962 as a prayer group first named Calvary Fellowship at a shop on Ivbizua Street, off Mission Road.
It was officially inaugurated in 1965 by Rev. Edgar Perkins. On October 26th 1968, Rev. Perkins approached the Assemblies of God to release Benson Idahosa, then a Sunday School Superintendent, to oversee the prayer ministry.

The fellowship moved to No. 26, Forestry Road, Benin City with Pastor Benson Idahosa fully in-charge.
The membership of the fellowship grew numerically. Pastor Benson Idahosa decided to build a church and this began his building ministry. He moved the members to Iyaro Church and on 18th of September, 1974. The church was registered under the Land perpetual succession Acts and Certificate number 1245 was issued. By the time Church of God Mission Iyaro was completed the membership had risen tremendously. The church was declared opened by Papa Gordon Lindsay and Papa Elton.

Church of God’s primary ministry was evangelism-Living up to her motto: Evangelism our Supreme Task, the church engaged in street evangelism and open air crusades. Through these activities souls were daily added to the church and everywhere papa went with the gospel churches were planted and solid structures erected.

In keeping with his belief of a ministry building that keeps up with the times, and to accommodate the influx of converts, the Archbishop laid the foundation of another church called Miracle Centre, on airport road, Benin City on Saturday 1st December, 1973 which was dedicated on Sunday 9th November, 1975 by Mrs. Freda Lindsay.

The continued growth of the ministry led to the building of Faith Miracle Centre auditorium, which many refer to as a marvel and was a vision fulfilled. In 1983, in far away Australia, the Archbishop heard God told him to build Him a building that will bring glory and honour to his name.

The auditorium which is believed to seat over twenty thousand people was the first stadium church in Africa. It was dedicated and opened on 2nd November, 1986. Coinciding with the growth of churches in Benin was the planting of branches. Today Church of God Mission International has presence in all parts of Nigeria and the world over.

The ministry has developed infrastructures to strengthen her ability to fulfill her mandate preparing an army to rescue humanity for God. This she had done through the establishment of a viable Bible School – All Nations for Christ Bible Institute, to fulfill the educational need for pastors and contribute to building a vibrant society.

The ministry has schools ranging from pre-Nursery (Word of Faith Group of Schools) to the university (Benson Idahosa University) and also functional medical facilities (Faith Mediplex Group of Hospitals) for all people. The ministry is resolved in her quest to produce whole persons in Spirit, soul and body.

All these accomplishments could not have happened without a focused, dynamic and spirit filled leaders by our father, Archbishop B.A. Idahosa.

The ministry is still being maintained and enhanced by our go getting Archbishop M. E. Benson-Idahosa.

There goes the popular aphorism: “birds of a feather flock together.” However, there is an exception to this saying. Eagles, though they are birds, do not fit into this epigram. As a matter of fact, eagles never fly in clusters, they fly singly. That perhaps, aptly describes why eagles are so distinct from all the other birds. So also are some men, who bear semblance to the eagle.

No doubt, there are a great number of successful people across the globe, each of whom represents an institution. They are authorities who have distinguished themselves in their God-given endeavors. The truth is, these “success stories” are rare to come by; however, for four decades, the entire world has been shaken to its very foundation by one man, propelled by a force of curiosity over the signs and wonders that followed him.

This great man stands out in the crowd. Without mincing words, this man is synonymous with faith; he is an institution; an international figure; a statesman whose finger print on national issues is readily sensed and his influence on all issues concerning life cannot be waved aside with the back of the hand. He is a legend who has left an indelible mark in the sands of time.

This man has been known by different appellations: a father of fathers, a spiritual dynamo, an exemplar of faith in our generation, a world acclaimed preacher, a great teacher with special pedagogic abilities and excellent vision, a “possibilitarian,” an epitome of justice, equity and fair play, an advocate of peace, a man whose life is replete with immense charisma, a trail blazer, a visionary leader to whom none compares, a prolific writer, an evangelist, a philanthropist and above all, a very good husband and father. Wherever this man’s name is mentioned, the world stands at attention.

Archbishop Benson Andrew Idahosa was one in a million. A rare gem! Possibly, that is why he is an enigma to all those who have known or heard about him. He was born on September 11, 1938 in Benin City to an Edo family, the Idahosa – Ezomo family.

He was the fourth of nine children of Late Pa John Idahosa. He was only a few months old, when on the order of his father, he was dumped on a rubbish heap because he was a sickly child. However, because of the unfading love of his mother, the Spirit of God stirred her up to rescue him.

As a toddler, he often experienced fainting spells. This re-occurring phenomenon, in the thinking of his father had brought disgrace and dishonour to the family. This forced him to resolve that the infant Idahosa be dumped on a refuse heap just behind their little house and left to his own fate. His father gave a stern warning that he should not be rescued from the garbage but because he was destined for greatness he lived to become one of the kingdom of God’s greatest men.

As the years rolled by, the sickly lad noted for fainting spells grew in strength and wisdom. He chose to change. Like the plant Saxifrage, often noted for its rock breaking abilities, Archbishop Idahosa surmounted the many obstacles that lay precariously on the road to success.

Benson Idahosa had a penchant for education and a great desire to study. At the age of eight, he was enrolled into primary school. Through thick and thin, he managed to scale through an initial western education in the Salvation Army School, Benin City and the Methodist School, Owo, Ondo State. However, this only whetted his appetite for more knowledge. Accordingly, through a correspondence programme with the London Benneth College, he obtained a Diploma in Business Administration, and a Higher Diploma in Office Management, while he worked in the Bata Shoe Company as a salesman.

As a result of his desire to excel and through hard work, coupled with God’s favor upon his life, he soon ascended to a supervisory position at the company. Little did he know that his experience as a supervisor was part of God’s way of preparing him for leadership in the ministry.

The young Benson Idahosa was ready to be an instrument in God’s hand and in 1962, at the relatively young age of 24, he launched into the ministry. He had great zeal for the work of God and his uttermost desire was to carry out the command of the Lord to finish the work which God had assigned to him.

Quite a lot can be said about his pastoral life. At the very beginning of his evangelistic crusades, he used his cultural advantage as a Bini to gain access to the surrounding Bini villages. His evangelistic crusades consisted of taking his team to the villages where, with the permission of the heads of the communities, he would preach to the people and pray for the sick. His first crusade was at Ajagbodudu, near Sapele, in 1961. His crusades were followed by signs and wonders.

In 1962 after his first evangelistic crusades, he enrolled as a correspondent student of a Bible College at Illorin. That same year, he held a crusade at Abraka. Over the years, he continued his theological education, and the following is a list of some of his degrees.

Papa (as he was popularly called) had a phenomenal popularity predicated on his achievements, and the seeds he has sown in the lives of the hopeless, and those who needed a touch from the Lord Jesus Christ. Little wonder then, that during his ministry he raised many persons from the dead, much to the consternation of many who doubted the efficacy and power of the word of God. With signs and wonders his popularity spread like wild fire.