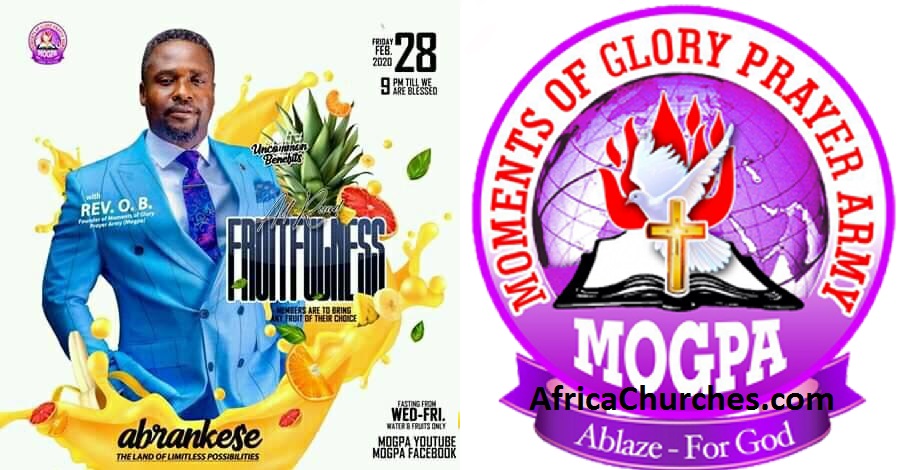 Report reaching GhanaChurch.com shows that, All roads lead to All Night on the land of possibilities Abrankese near Kuntenase in the Bosomtwe District of Ashanti Region.

Abrankese All Night is coming on live on Mogpa TV and Mogpa Radio with the host Rev Isaac Osei-Bonsu, ardently called Rev O.B with acumen in God’s word and philosophizes that everything in God’s words is possible.

According to GhanaChurch.com reporters, Rev Isaac Osei Bonsu, also known as Rev. OB will to take the purpose of the church out from the unseen room to another prayer inhabitant and all dwellers speak one prayer language at Abrankese.

All roads lead to the land of possibilities Abrankese near Kuntanase in the Bosomtwe District of Ashanti Region. Come along with the fruits of your choice, it gonna be superb, magnificent, majestic, splendid, grand, impressive, imposing, awe-inspiring, breathtaking, gorgeous, luxurious, so don’t miss it.

It’s fruit direction this Friday 28th February, 2020 at Abrankese so come with the fruit of your choice but preferably apple.

Note; we are fasting from Wednesday to Friday where you can drink water and eat some fruits within the fast. Meaning you won’t eat any heavy food until Friday 12:00pm.

Get involved of this fast and it shall wonder you how the God of MOGPA does His works.
Ablaze For God.

No matter your pain you shall succeed!!!

Rev O.B a man of prayer, has passion for the lost souls and because he acts according to the direction of the Holy Spirit, his ministration are characterized by signs, wonders and miracles.

He is the founder and president of Moments of Glory Prayer Army [MOGPA], a non-denominational prayer army with membership base of 140,000.

Anane Boateng Sports Stadium is a multi-use stadium in Kumasi, built by Mr Kwabena Kess the C.E.O of Kessben Group of Companies Ghana at Abrankese near kuntenase in the Bosomtwe District of Ashanti Region. It is used mostly for football matches and served as a gathering grounds for thousands of people and members mostly Moment of Glory Prayer Army(MOGPA).The stadium is the home stadium of Medeama SC of the Ghana Premier League. The stadium holds 12,000 spectators and opened in 2007.