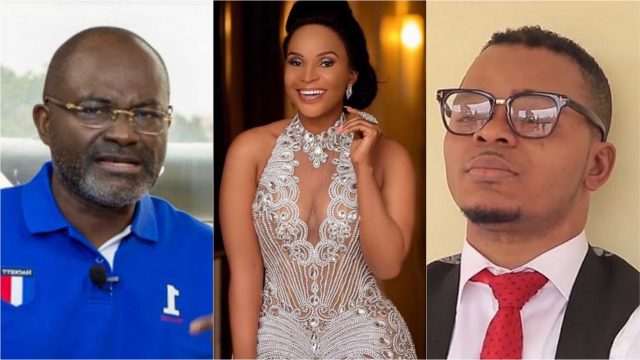 An outspoken politician, Kennedy Agyapong, seems to have stripped controversial pastor Bishop Daniel Obinim naked, accusing him of being a habitual womanizer, whose taste for girls knows no boundaries.

In a latest video circulating on social media, Mr. Agyapong, who is the Member of Parliament (MP) for Assin Central, has listed names of different ‘hot’ ladies that he claimed Bishop Obinim had committed adultery with.

He said on a single count, he (Kennedy) managed to trace 14 different women that Bishop Obinim, who owns International God’s Way Church, had slept with.

Besides, he showed the pictures of the ladies to buttress his claim on his Net2 television station.

Mr. Agyapong said topping the list of the Obinim girls was a fair in complexion and stunning-looking female actress, who is very popular in the country. He said this particular actress was much loved by Obinim.

The tall list of ladies, who have so far fallen victim to Bishop Obinim’s alleged sexual escapades, according to the MP, includes a boutique owner, a receptionist, a singer and a maid servant, who was hired to perform household chores for the controversial pastor.

Mr. Agyapong, who sounded confident and claimed to have evidence to buttress his wild allegations against Obinim, one after the other, mentioned names of all the 14 ladies, some of whom were then married, that Obinim bonked.

He said most of the Obinim girls were members of the International God’s Way Church which has branches in Kumasi, Accra and Tema.

Mr. Agyapong indicated that he also had a different list of other ladies apart from the 14 that Bishop Obinim, who claims to be an ‘Angel’ and has been to heaven several times, had slept with, and said he would release that list at a later date to further expose the controversial pastor.

According to Mr. Agyapong, he decided to ‘open fire’ and ‘expose’ the adulterous lifestyle of Obinim because the pastor’s wife, Florence Obinim, a popular Ghanaian gospel singer, had provoked him, by labelling him (Kennedy) as a womanizer.

“Florence Obinim, who is Bishop Obinim’s wife, had the audacity to insult and label me as a womanizer because she said I have 19 children. For her information, my children are more than 20 and I am proud about that!” he said.

“I decided to close down the curtains on the Obinim issue for sometime due to the Covid-19, but his wife has provoked me to come out,” he added.

The Assin Central MP, who has vowed to tear Bishop Obinim and his wife, Florence, apart with his series of exposé, said, “You Florence, you sleep with this nasty Obinim and yet you had the audacity to insult me.”

The MP said by the time he was done with his exposé, nobody would regard Obinim as a genuine man of God again, because he is fraudulent and a criminal.

Mr. Agyapong even alleged that some of Obinim’s girls were related to his own wife, Florence, adding that he has never seen a man who is ‘nasty’ and cannot control his libido like Obinim.

According to him, Obinim has aided his wife, Florence, to currently relocate to Spain, so that he (Obinim) will have his freedom to practise his unrestrained adulterous lifestyle in Ghana.

Mr. Agyapong accused Obinim of destroying many marriages and breaking homes because he had been bonking people’s wives, especially spouses of his own junior pastors.

According to him, most of these ladies have had their marriages ended abruptly after their husbands painfully found out that Obinim was bonking their wedded wives.

Caught in the act

Mr. Agyapong alleged that Obinim does not respect his wife, Florence, because he usually sent some of his girls to their matrimonial home, adding “Florence has caught him in bed with different women before.”

He stated that Florence had made a big mistake by deciding to throw the first punch at him (Kennedy), threatening to dig deep and expose all the skeletons in the wardrobe of Obinim in the coming days.

According to him, he has a recorded audio that Obinim told one of his numerous girls that no pastor has the power to see vision about people, saying, “This is Obinim’s own words that support my conviction that he is fake.”

Mr. Agyapong said his heart always bleeds whenever he sees ‘fraudsters’ like Obinim parading as men of God and using their status to defraud the public, adding, “We need to expose fake pastors in this country.”

In a clear response to Kennedy Agyapong, Obinim has said in an audio recording that it is true that he had committed adultery before, adding that his wife, Florence, is even aware of that.

“I have apologized to my wife, Florence, for sleeping with other women and she has forgiven me, and I have decided not to sleep with other women again,” Obinim said on the audio recording, which has gone viral on social media.

“Florence will not leave me because of this issue; even if she decides to leave, she will marry again and I will also marry again,” he said, noting that he had promised his fans that he would not talk about the Kennedy Agyapong issue again.

Since the MP’s explosive interview, some of the ladies whose names were mentioned have started threatening legal action.