The National Music Committee of The Church of Pentecost climaxed this year’s National Music Seminar with a special event to celebrate the music ministry of Apostle Professor Opoku Onyinah through whom the Church has been blessed with over 160 songs.

It is worth noting that under Apostle Prof. Opoku Onyinah’s tenure in the last decade, there has been an abundance of divinely-inspired music in the Church which is evident in the introduction of annual theme songs and albums as well as the formation of the National Choir known as “Voice of Pentecost”.

The event was, therefore, organised to thank the Lord for the life of the outgoing Chairman and his wife, Mrs Grace Opoku Onyinah, and also appreciate the Lord for using them as vessels to enhance the music ministry and liven the worship of the Church.

The Voice of Pentecost was present to minister some of the divinely-inspired songs credited to Apostle Professor Opoku Onyinah such as “Domfo Nyame”, “You Are The One I Need”, “Who Am I To Boast In Your Presence”, “Nyansabuakwa Nyame”, and “Owura Bi A Midi N’akyi”

After each song ministration, Apostle Prof. Opoku Onyinah shared with the audience how and where he received the particular song ministered by the choir.

A key moment at the event was a wonderful musical tribute to Apostle Prof. and Mrs. Grace Opoku Onyinah by Agya Osei Kwame Korankye, the renowned Saperewa artist, commending the outgoing Chairman for a remarkable work done for the last 10 years. According to him, the remarkable policies introduced by the Chairman has helped to retain and reinvigorate the youth in the Church. He also commended him for the massive infrastructural growth and the remarkable rise of the Church to national and international prominence.

Prophet Appiedu (Retd.) and Elder Dr. Kwesi Mireku also took turns to shower praises on the Chairman for his great support and counsel to them at some point in their lives.

To put the icing on the cake, the National Music Committee Members presented a Saperewa instrument to Apostle Prof. Opoku Onyinah in recognition of his wonderful contribution to the music ministry of The Church of Pentecost. 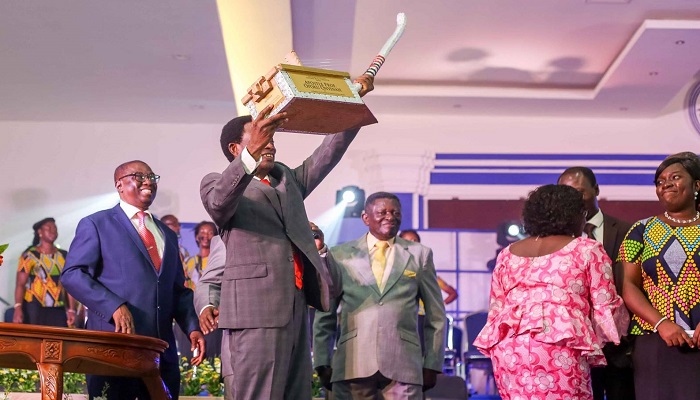 The Seperewa instrument, also known as Seprewa or Sanku, is a Ghanaian (specifically Akan) harp-lute. Modern Seperewa typically has between 10 and 14 strings, set onto a standing bridge, and is connected to the neck of the instrument by winding it around the instrument directly. It is either played with the thumbs or rarely with the forefingers or bow. The sound is produced on it by setting the strings into vibration.

Reading the citation before the presentation, Mrs Grace Gakpetor stated that any musical instrument, including the Seperewa, could be used to offer acceptable worship to the Lord. She said that, in this sense, the Seperewa instrument being presented to the Chairman, would serve as a constant reminder that God is no respecter of persons and that anyone who avails him/herself to the Lord could be used by Him to accomplish His divine purpose.

The Media Ministry Pastor (MMP) of the Church, Apostle Nii Tetteh Tackie, on behalf of the National Media Ministry, presented a package which consisted of over 300 audio and video files of some of the ministrations of Apostle Professor Opoku Onyinah to him. Before that, he paid glowing tribute to Apostle Prof. Opoku Onyinah for his divinely-inspired and deeply insightful teachings broadcasted through the 30-minute television and radio programme of the Church via the various media outlets across the country including PENT TV.

Apostle Tackie said that the Chairman’s sermons brought many into the saving knowledge of Jesus Christ. He also shared with the audience how a man who was contemplating suicide rescinded his decision to take his life after watching a message of the Chairman on television. The gentleman rather reached out to the Media Pastor who referred him to the Counselling Unit for assistance. To the glory of God, the man is alive and doing very well.

The MMP also acknowledged Mrs Grace Opoku Onyinah for her advice and encouragement that have been instrumental in the growth of the media ministry of the Church, particularly the “Pentecost Hour” programme.

The Chairman, Apostle Professor Opoku Onyinah, was magnanimous in his response by stating that he does not deserve to be honoured since he is only an unworthy vessel through whom the Lord has used for His divine purpose. He thanked the organisers for the event and also advised all gathered to take a cue from his life experience and avail themselves to the Lord for His use.

The National Music Seminar was held from June 12 to 16, 2018, for singers, instrumentalists and sound technicians at the various levels of the Church in Ghana. The event was aimed at equipping and nurturing the musical gifts of members of the Church in order to make a more meaningful impact on their audience and enhance the worship of the Church.
The Church of Pentecost, is a worldwide, non-profit-making Pentecostal church with its headquarters in Accra, Ghana.
Call: 0302777 611 OR 0302772 413
Send an Email on info@thecophq.org
Accra Ghana – West Africa
credit: thecophq.org